Two works have been selected to tour with those of 18 leading national and international media artists in the Experimenta Make Sense International Triennial of Media Art. Commencing in Melbourne at RMIT Gallery on October 2, 2017, the tour then travels to 9 galleries in the Eastern states of Australia over the next three years. Many of the galleries are regional and it is a great opportunity to show my work to an audience beyond the mainstream gallery-goer.

Life Support System was the first work selected and much effort has gone into making it durable enough to survive the 3-year program.The work has also been updated with new air flow sensors and display layout that highlights the chaotic interactions between the nature-humanity-economy systems. It now also has an even bigger red button.

This magical image taken by Rebecca Carey was chosen as the ‘hero image’ by Experimenta to represent the exhibition in Melbourne and has featured heavily in the show promotions. 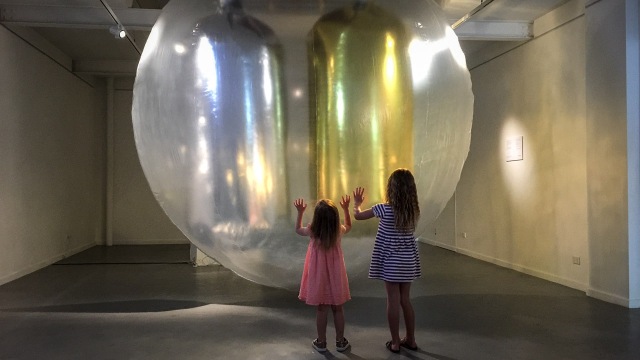 Catch Your Breath was a late addition to the tour and it has been a frantic effort to add new functionality to the work. Participants can now share their breath on-line at catch-your-breath.com and each breath will be added to a digital archive. It is anticipated that more than 40,000 breaths will be collected over the tour. These will be added to the nearly 5,000 breaths collected at The Lock-Up in 2016 and lead to research on how to represent and experience this collective breath.

A trial run of the updates took place at the one-day Robotronica festival in Brisbane in August with 420 breaths collected, mostly from families and kids. The work will be featured in Melbourne at the Sofitel hotel on Collins Street during October.